The Water Conflict Chronology was developed and has been maintained by the Pacific Institute for over two decades. Each year, additions, modifications, and updates to the Chronology are posted. In 2018, a major revision was prepared, with substantial changes to database coding, formatting, definitions, and visualizations. The methods described below refer to the process used for this update. The revision also includes a substantial increase in the total number of entries, and we anticipate further additions in the coming year. These additions to the database were enabled by reviewing and integrating information from free, publicly available databases that track violence and conflict around the world. The databases that were used are listed in the Sources section below.

Basis or Form of Conflict Update

Each entry has been recategorized to simplify and clarify the forms of conflict. The earlier classification system listed six categories; the new one lists three. Some entries involve more than one form of conflict.

We code each of the entries in the Chronology as an action of one or more of the following: states, non-state groups, individuals, or a combination of actors. We no longer specify entries as associated with “terrorism” because of divergent definitions and labels applied to non-state actors.

All entries in the Water and Conflict Chronology have been categorized by world region. For the 2018 update, the regions for the new entries and existing entries were categorized using the United Nations (UN) Geographic Regions (https://unstats.un.org/unsd/methodology/m49/, accessed 4/17/2018). The UN regions are based on Continental Region (Level I); which are further subdivided into Sub-Regions (Level II) and Intermediary Regions (Level III). We categorize entries by the Level II Sub-Regions. Level I and Level II are presented in the table below. 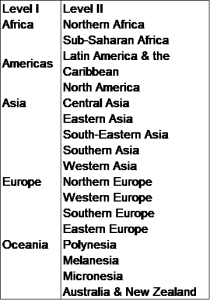 Previous versions of the Water and Conflict Chronology categorized each entry as violent (“Yes”) or non-violent (“No”). For the 2018 update, we removed this category completely and instead, updated the criteria for including items in the Chronology.

Items are included when there is violence (causing injuries or deaths) or threats of violence (including verbal threats, military maneuvers, and shows of force). We do not include instances of unintentional or incidental adverse impacts on populations or communities that occur associated with water management decisions, such as populations displaced by dam construction or impacts of extreme events such as flooding or droughts. Based on this new definition, some previous entries have been removed.

Events were “lumped” into a single entry, if the timing, event description, parties involved, and geographic location were sufficiently close in time to indicate that it was highly likely that they were either the same event or sufficiently connected to be part of a related action. Events close in time but reported in different locations or reported as different kinds of actions were split into separate entries.

To map the entries, we gathered the latitude and longitude of each event using the location provided in the source of the entry. When a single entry contained an event or multiple events that occurred in more than one location, a more broad, generalized location was chosen to represent the entry. For example, if a single entry included an event in two cities in Yemen, then the centroid of Yemen was used to identify the latitude and longitude. If a precise location of an event reported in the source could not be located, a more generalized location was chosen to represent the entry. The free desktop version of Google Earth Pro (V7.3.1) was used for identifying event locations. Lat/Long was recorded in decimal degrees format.

While we strive to provide accurate information, we are not able to guarantee that the placement of the event locations on our map are accurate. In some cases, exact locations are unknown or not reported, or are lost or misinterpreted in translation. Furthermore, many locally used place names are not captured by geographic information systems such as Google Earth Pro, and/or by the western, English-speaking community in which this chronology was created.

For the 2018 Water Conflict Chronology update, Internet searchers using terms such as “conflict database” and “war database” were used to discover online repositories of violent conflict events that were related to or involved fresh water. These searches revealed several new sources of potential entries for the Chronology. The list of sources identified as useful for providing new entries for the Chronology is below, including web URLs and the date of the last download from the associated source.

The list below should not be taken as a comprehensive or all-inclusive list of all possible outside sources for finding water-related conflict events. This list represents select datasets that we have been able to find through online web searches of free, publicly-available data potentially related to water and violence. We will continue to add to this list as we discover new sources that can provide this kind of information.

Of note, the Princeton University Library maintains a Politics Resources Guide, which is an annotated guide to other online resources and data sets. It includes a sub-section on conflict and security resources. Many of the sources below were discovered through this resource guide. Note that all sources from the Princeton University Library website that were categorized under “Conflict, Political Violence, and Peace Data” were investigated for opportunities to extract water-related violent events. Only those sources listed below were found to be searchable for these types of events. As always, we welcome contributions of additional information and data, at info@pacinst.org.

Other sources that have yet to be investigated for potential water-related conflict entries include:

“There are few books that can genuinely be described as indispensable. This is one…essential reading.”

“The series continues to be an invaluable collection of all kinds of water-related materials, ranging from concise stand-alone chapters on important topics to numerous sections of data.”