Published every few years, The World’s Water provides both detailed analysis of the most significant trends and events and up-to-date data on water resources and their use. The book is an essential reference for water resources specialists, resource economists, planners, students, and anyone concerned with water issues. 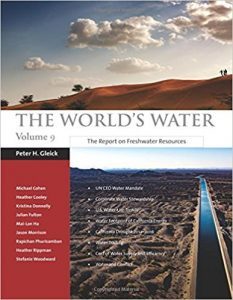 The World’s Water: The Report on Freshwater Resources (from the Pacific Institute) is the pre-eminent publication regularly addressing global freshwater challenges and solutions. The first volume was published in 1998 and the current volume – the ninth – continues the tradition of tackling timely, critical freshwater problems in a fresh, easy-to-read style. Information on the previous volumes and important water data can be found online at www.worldwater.org. When the first volume of The World’s Water was published in 1998, the United Nations’ Millennium Development Goals (MDGs) for 2015 had not even been established. The concepts of water “footprints,” “virtual water,” “corporate water stewardship,” “peak water,” and other now-central topics had not yet been put forward or were mostly unknown. Yet today, the MDGs have been replaced with a new set of comprehensive environmental and social targets, the Sustainable Development Goals (SDGs) for 2030. A wide variety of research, academic, advocacy, and policy groups are addressing water problems in new and innovative ways. And the demand for good water analysis is greater than ever. This new volume continues to offer insights into critical global water problems, overviews of data and analysis around water use and management, and case studies of some of the greatest water challenges around the world. The chapters in the current volume include the issue of corporate water stewardship, the human right to water and sanitation, water-use trends in the United States, an assessment of the water footprint of California energy, the consequences of the severe five-year California drought, a review of water markets and economic strategies for water management, and a summary of the cost of alternative water supply and demand strategies. The current volume also includes the regular update on the Pacific Institute’s unique Water Conflict Chronology, with historical examples of conflicts related to water going back to 2500 BC and new entries through early 2017; a summary of the 2017 Pontifical Academy of Sciences Vatican meeting on the human right to water; and a review of critical issues around public access to water through drinking fountains. The World’s Water has always been about more than just bad news. There is plenty of good news and there are many innovative efforts underway to identify and implement sustainable water solutions. The latest volume continues the tradition of bringing these solutions to students, the public, policy makers, and scientists working to understand the world of water.

The World’s Water Volume 9 is also available in the following formats:
As a print-on-demand softcover book for $55.00.
As a Kindle ebook for $9.99. 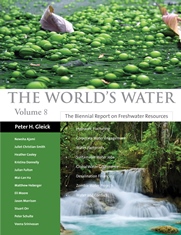 View a selection of writings and data tables from the 2011 release, The World’s Water, Vol. 8, as well as material from the previous seven volumes. 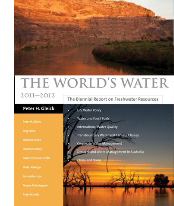 The World’s Water, Vol. 7 was released as the Pacific Institute headed into its 25th Anniversary year in 2012. Institute President and series editor Peter Gleick, with coauthors Lucy Allen, Juliet Christian-Smith, Michael Cohen, Heather Cooley, Matthew Heberger, Jason Morrison, Meena Palaniappan, and Peter Schulte of the Pacific Institute, address the timely and pressing issues in the management of our most precious resource. Topics range from water and fossil fuels, China and dams, and U.S. water policy to international water quality, transboundary water and climate change, corporate water management, and drought and water management in Australia. Nineteen data tables provide an invaluable resource for analyzing the state of the world’s water, accessibility, sustainability, attitudes, and more including top environmental concerns and bottled water consumption stats. There is also a fun Water Brief on “Water in the Movies.” Read more. 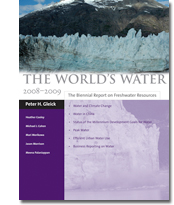 In the sixth volume in this highly regarded series, The World’s Water 2008-2009, Pacific Institute President and series editor Peter Gleick, with Institute coauthors Heather Cooley, Michael Cohen, Mari Morikawa, Jason Morrison, and Meena Palaniappan address the ever-more-pressing issues of our use and misuse of the world’s freshwater resources. Topics range from peak water, China’s water crisis, and climate change impacts and adaptations, to updates on the Millennium Development Goals, business reporting on water, and urban water use efficiency. Twenty new data tables provide a definitive resource for everyone concerned with sustainable water use, including the eye-opening chart of “The Water Content of Things.”

View a selection of writings and data tables from the new volume, The World’s Water 2008-2009. 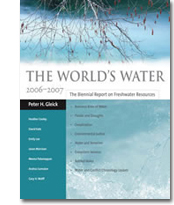 In The World’s Water 2006-2007, Pacific Institute President and series editor Peter Gleick convened Pacific Institute staff and others in presenting the fifth edition, covering some of the most significant current worldwide water issues: * water and terrorism, * preserving and restoring instream water allocations, * an update of seawater desalination, * the growing risks of floods and droughts, * environmental justice for water, * water risks facing industry, and * updated information on bottled water, international disputes over water, and the discovery of water on Mars. 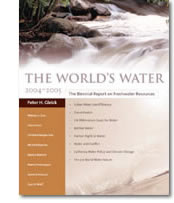 In this fourth volume of his prominent series, Dr. Peter Gleick and his research team focus on the most significant current trends worldwide: how to meet the basic needs of over 1 billion people without access to clean water, the growing controversy over public vs. private water, the role of conservation and efficiency in solving water problems, and concerns about skyrocketing bottled water use. Other chapters delve into a range of other critical topics — from the economic value of water, to the unsustainable use of groundwater, to water policy and climate change. The Data Section of the book contains updated and new data on many critical water issues from the local to the global level. 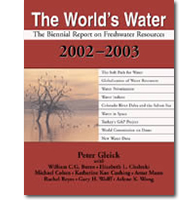 The third volume of The World’s Water is an effort to explore, understand, and solve a variety of critical water issues that include the global water crisis, global warming and water, privatization and globalization of water, and water-related conflicts. The central thrust of The World’s Water 2002-2003 is that we must rethink the way we capture, distribute, and use water if we are to meet the challenges of increasing scarcity and growing populations. Other chapters cover the increasingly contentious debates over globalization and privatization of water, new measures of water well-being, the risks of climate change, and new information on dams and water. 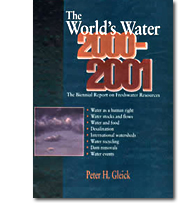 The second volume of The World’s Water contains new chapters on global water use projections, international river basins, the complex connections between water and food production, desalination, wastewater treatment and reuse, and the legal issues around a human right to water. As with the first volume, a large number of data tables are provided on a wide range of water-related issues, including water supply and demand, desalination capacity, reservoir construction, salinization of land, and updated numbers of endangered and threatened aquatic species. 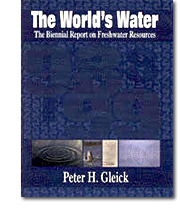 The first volume of The World’s Water (1998-1999) includes chapters on the changing global paradigm for water management and use, the environmental implications of large dams, possible consequences of climate change, and the links between water resources and conflict. The book also contains more than fifty charts, tables, and maps that present data on a range of topics including the availability and use of water, numbers of threatened and endangered species, dam and desalination capacity worldwide, and much more.

“There are few books that can genuinely be described as indispensable. This is one…essential reading.”

“The series continues to be an invaluable collection of all kinds of water-related materials, ranging from concise stand-alone chapters on important topics to numerous sections of data.”